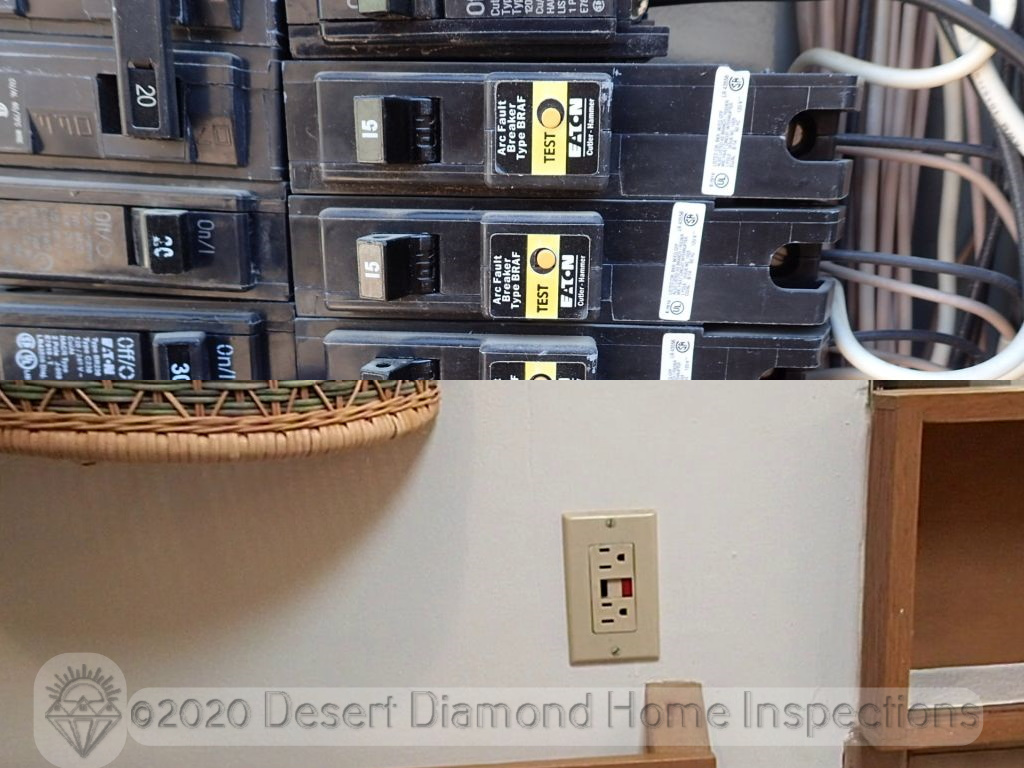 Testing GFCI outlets and AFCI breakers is the seventh article in our series of top 10 home maintenance tips. These tips are based on our experience from inspecting homes in Tucson where we see certain issues on a regular basis. Issues that could have been prevented with some easy and affordable proactive maintenance. Proactive home maintenance helps prevent unpleasant surprises and major damage, and keeps maintenance and repair costs down. We hope you find these tips helpful and use them to keep your home in good shape.

Our seventh home maintenance tip deals with testing electrical safety devices to ensure they are still working. Specifically, testing GFCI outlets and AFCI breakers. Whether you have them in your home, depends on the age of the home. If you do, regular testing should be part of your home maintenance protocol. If these electrical safety devices work properly, they can prevent you from getting shocked (GFCI) and your house from burning down (AFCI).

What are GFCI outlets?

GFCI stands for Ground Fault Circuit Interrupter. According to OSHA, “The ground-fault circuit interrupter, or GFCI, is a fast-acting circuit breaker designed to shut off electric power in the event of a ground-fault within as little as 1/40 of a second. It works by comparing the amount of current going to and returning from equipment along the circuit conductors. When the amount going differs from the amount returning by approximately 5 milliamperes, the GFCI interrupts the current.”

In layman’s terms, it is a safety device for electrical outlets that protects you from electrical shock. Here is how: Imagine you are in the bathroom using your hair dryer and accidentally drop it into the sink full of water. The GFCI will then sense the difference in current and shut off the power within a fraction of a second. This prevents you from electric shock when you reach for the hair dryer.

What are AFCI breakers?

AFCI stands for Arc Fault Circuit Interrupter. According to Wikipedia, “An arc-fault circuit interrupter (AFCI) also known as an arc-fault detection device (AFDD) is a circuit breaker that breaks the circuit when it detects an electric arc in the circuit it protects to prevent electrical fires. An AFCI selectively distinguishes between a harmless arc (incidental to normal operation of switches, plugs, and brushed motors), and a potentially dangerous arc (that can occur, for example, in a lamp cord which has a broken conductor).”

In layman’s terms, it is a safety device for electrical circuits that protects a house from dangerous arcing that could cause a fire. Here is how: Imagine you have driven a nail into the wall to hang a picture. However, you did not check for electrical wiring. The nail happens to go into an electrical cable in the wall and damages it, resulting in arcing. The AFCI breaker can detect the arcing condition and shut off the power to the circuit, preventing a potential fire.

Do all homes have GFCI outlets and AFCI breakers?

If your house was built before the 70s, there are probably no GFCI outlets or AFCI breakers present, unless somebody remodeled or upgraded.

Do you need to install GFCI outlets and AFCI breakers if your house does not have them?

No, there is no requirement to install them just cause. If you think that you would feel better or safer in your home with these devices installed, you can certainly have an electrician install them for you – not a bad idea. If you have your house remodeled and the work includes electrical, then yes, the electrical work must be done to current code, standards, and requirements.

How to test GFCI outlets

Note: Do not be surprised if you only find one GFCI outlet in the bathroom, kitchen, garage, or exterior, even though you have multiple outlets. One GFCI can protect all outlets on an entire circuit.

Test each GFCI outlet by following these steps:

Signs that the GFCI outlet is not functioning as intended:

How to test AFCI breakers

Before you start testing:

Test each AFCI breaker by following these steps:

Signs that the AFCI breaker is not functioning as intended:

When a GFCI outlet or AFCI breaker fails, they need to be replaced. They cannot be repaired. Call a qualified licensed electrician to replace each faulty device. They are not that expensive.

Put a reminder on your calendar for testing GFCI outlets and AFCI breakers. The manufacturers of said devices typically recommend that you test them monthly. Some people find this excessive and suggest quarterly or annual testing.

Tip: Testing GFCI outlets and AFCI breakers is best done during the week early in the day. If one or more fail, you want to be able to get an electrician to come out quickly and replace them.

If you do not have an electrician on speed dial, click here to find a good electrician in the Tucson, AZ area.

Testing GFCI outlets and AFCI breakers is an important part of your home maintenance program. As long as these electrical safety devices function properly, they can prevent electrical shock and house fires. However, they can fail and malfunction. So test them regularly.